SO WHERE'S THE RACISM?

Election results from South Carolina’s primary are very enlightening. A first generation Indian-American woman, Nikki Haley won the Republican primary for Governor, which would make her the second Indian-American Republican Governor in the south, after Bobby Jindal of Louisiana. More telling was the victory of a black Republican in the state’s first congressional district, handily defeating the son of long time Senator and 1948 Dixiecrat candidate for President Strom Thurmond. Both won their primaries handily and will very likely be elected in the fall.

This is in South Carolina, the most confederate state of the Confederacy. South Carolina, where the Civil War began. The first state to secede from the union. If this doesn’t bury the shibboleth of “racism” in this society nothing will. The left has continuously used “racism” as a tool to pummel the right, now demonstrably without any foundation whatsoever. It is time to bury this myth in contemporary American once and for all.

The other notable tidbit in this election was that both candidates were picked by Sarah Palin. She has had a remarkable batting average thus far in picking winning candidates, is looking stronger every day, and can no longer not be taken seriously.
Posted by gsarant at 9:54 PM No comments:

Email ThisBlogThis!Share to TwitterShare to FacebookShare to Pinterest
Labels: racism

Anything on a computer is ephemeral. If you don’t get your work produced in the real world you are on very dangerous ground. Computers have improved a lot but they are still not completely reliable. Hopefully we back things up, but I’ve come across a larger long term problem; unexpected obsolescence.

I’ve been preoccupied lately trying to salvage about fifteen years worth of files from obsolete computers. I use mostly Macintoshes, and before the current very stable OS X came along they would frequently crash, sometimes seriously enough to have to reformat the hard disk. Fortunately I had backups of most of the data, but unfortunately it was written to cartridges that require a SCSI connection, which Apple used to use before making it obsolete along with all the peripherals that used to connect with it. I have one computer left with this type of system but it is flaky and unstable. Still I’ve been able to recover a lot of data.

Now comes the really challenging part. A lot of it was created in programs that no longer exist so there is no way to read the contents without the old program, including finding anything online since this is all pre-Internet stuff. Many companies have simply gone out of business or discontinued products with no support. Current programs can’t read the files. I’ve been struggling to find the old program installation floppy disks to try and reconstitute the programs. The reason a lot of this stuff didn’t get carried forward and translated into a newer format is that most of it consists of notes of ideas for future use as in a scratch pad, or musical improvisations; generally things done on the fly.

I’m making some progress in recovery, but what this tells me is that nothing that is current is necessarily going to be around in the future. There is no guarantee decades ahead that there will be programs capable of reading all that you’re doing now. Obsolescence is an ongoing problem with technology, and if we’re not carefully conscious of this fact much can be permanently lost.
Posted by gsarant at 7:17 PM No comments: 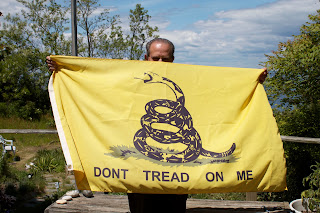 THE UNEXPECTED HAZARDS OF NATURE

Most lovers of nature tend to be city people. They appreciate the natural beauty of undisturbed places with reverent enthusiasm. Those who live and work in such places, on the other hand, view nature as something you use for some productive purpose, and a place that is not without hazard. Thus, the appreciation of nature as such is something confined to city people who don’t have to live with it. For those in the country such as farmers, it is something you use when not full of nuisances and menace.

This thought recurred to me after clearing a small wooded patch of brush at my summer house. I managed to get Lyme Disease for the third year in a row, after getting a few tick bites, and actually extracting a live tick from one of them more than a day later, observing its kicking little legs through a magnifying glass. The bites were swollen up in a familiar, unmistakable pattern. The first time it happened the disease had progressed pretty far; I was sore, listless, and had malaria-like symptoms of chills on a hot day. An antibiotic prescription cured the problem, but the following year and this year again I got the same bites so I immediately emailed my doctor for another prescription.

At the time I had taken all necessary precautions- I was fully clothed with long sleeves but they still managed to hit more or less the same area on my belly and this time on my butt. I finished the pills, but the sores still haven’t gone away completely; they take a long time to heal. Somehow the disease made its way from Lyme Connecticut across the sound to here in Long Island. It is generally carried by deers, although I haven’t seen one here since last year. This just goes to show that even a semi-suburban patch of woods has its hazards. For now I’m leaving this patch of nature to the rabbits.
Posted by gsarant at 1:07 PM No comments: